01 canonisation Prayer "Omnipotence of the Father" 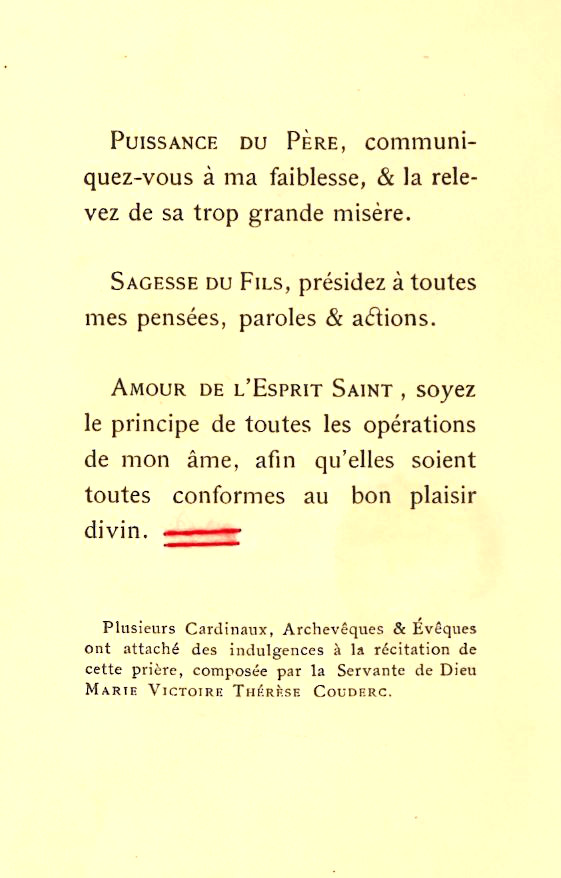 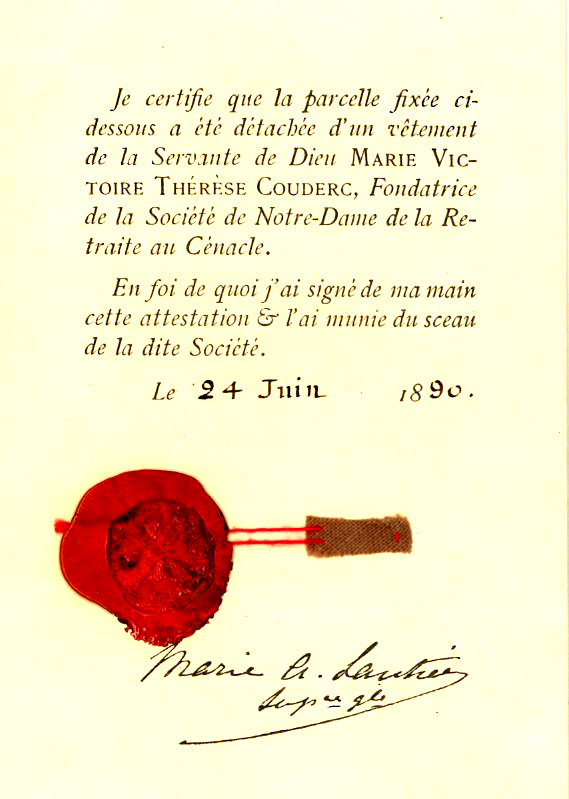 This prayer composed by Mother Thérèse, written in pencil in a small notebook, was already used in private circulation in the community of Fourvière even before the death of Mother Thérèse. Mother Marie Aimée, Superior General very quickly wished to disseminate it widely. From 1886, she took care, with Father Léon Couderc, nephew of the Holy Mother, of having it printed and presented to the bishops to get them to attach indulgences to it. She asked all the local superiors (letter of December 8, 1885) to make this request in their dioceses.

An old friend of the Congregation, Cardinal Guibert, Archbishop of Paris, had already granted, from October 24, 1885, an indulgence of 100 days to this prayer. Cardinal Caverot, Archbishop of Lyon, also granted the same number of days in his diocese. Bishop Bonnet, from the diocese of Viviers (Ardèche – France), the bishops of Nancy, Rodez, Orleans, Arras, Autun, Marseille, the archbishops of Tours, and Cambrai, in France, each 40 days.

Monsieur 1'Abbé Léon Couderc wrote: "This prayer is admired for its profound theological meaning, its simplicity and the odor of sanctity which it exhales. It is wholly stamped with the language of St. Gertrude. I could not be more pleased with the very kind welcome it has received. His Excellency the Bishop of Viviers with whom I had lunch last week, as well as the Vicars General and the Superior of the Major Seminary find this prayer extremely well done. Here at St. Martin's in the Ardèche we recite it after the evening prayers in the church regularly. The Carmelites of Pontoise and of Montelimar, the Sisters of' St. Joseph of Les Vans and of Aubenas, the Christian Brothers, the Trappists and the Sisters of St. Regis, together with many persons in the world have received it with the greatest satisfaction and are asking for more.

May our Lord in this way be better known and loved and glorified. May our venerated Mother Therese obtain from it an increase of glory on earth and in heaven!"

The consecration arrived from Rome in 1890 when, at the request of Mother Marie Aimée, Pope Leo XIII universally approved this prayer. The Secretary of the Sacred Congregation of Rites presented him with a revised version of the prayer (in French). Repealing all the indulgences given locally by the bishops in France, he granted an indulgence of 200 days "to all the faithful who, at least contrite in heart and with devotion, will recite" this prayer. This indulgence, valid in perpetuity, can be earned once a day and can be applied to the souls of the deceased. This last disposition had been requested in relation to Mother Thérèse's zeal for the liberation of souls in the Purgatory.

Version of Mother Thérèse, written in pencil in a small notebook 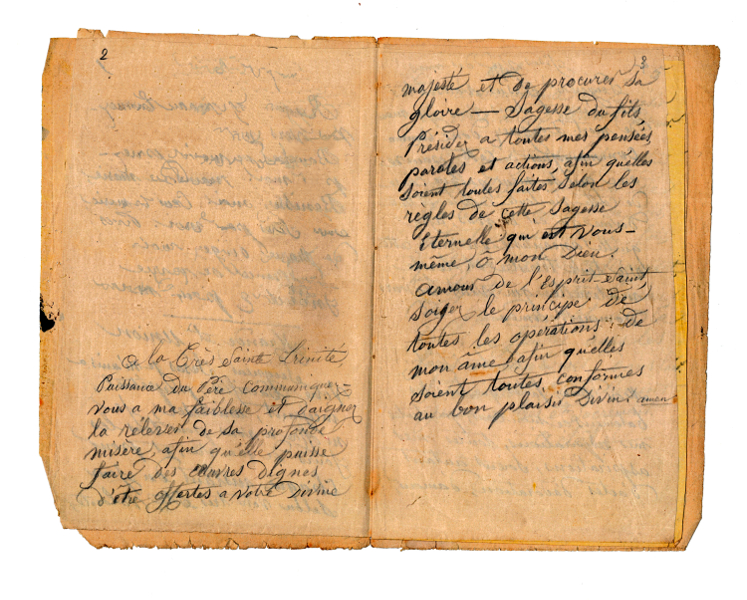 To the Most Holy Trinity

Omnipotence of the Father, communicate Yourself to my weakness and deign to lift it up from its profound misery, so that it may perform works worthy of being offered to Your Divine Majesty and of procuring its Glory.

Wisdom of the Son, preside over all my thoughts, word and actions, in order that they may all be done according to the rules of that eternal Wisdom which is Yourself, O my God.

Love of the Holy Spirit, be the beginning of all the operations of my soul, so that they may all be conformed to the Divine Good pleasure! Amen!

Revised version (original in Latin), indulgenced by the Pope:

Prayer to the Holy Trinity

Omnipotence of the Father, help my weakness, and draw it out of the depth of its misery.

Wisdom of the Son, direct all my thoughts, words, and actions.

Love of the Holy Spirit, be the beginning of all the operations of my soul,

so that they may always be conformed to the Divine Pleasure.