Mother Thérèse and Holiness: Her Meeting with Don Bosco 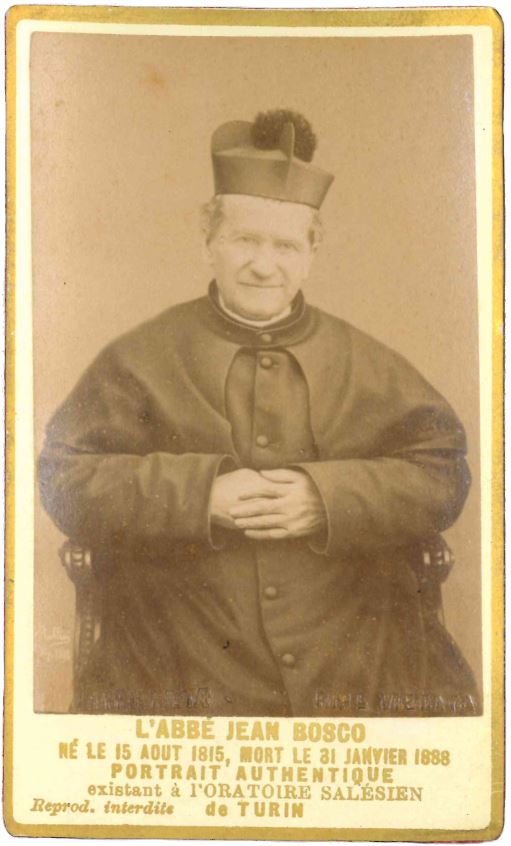 Last month, we saw how, in her correspondence, Mother Thérèse exhorted to holiness and in order to attain this, we must imitate the saints.

Thanks to the testimony of a coadjutor Sister, who wrote following the request of the Superior General to send all possible memories about Mother Thérèse ( see the stage of the cause in January), we have a view of Mother Thérèse’s reflection on the ways of holiness:

“On the days of the holidays, the Superior sometimes asked how each one had done her meditation. On one feast of All Saints, when it was Mother Thérèse's turn to answer, she blushed a little, but at last she told us that she had addressed all the saints and asked them how they had arrived in Heaven. Each, she said, had her own particular way, but they resemble each other on one point. The motive of God’s love had made them overcome all difficulties and Mother Thérèse concluded from there that we too should love much and then everything would become easier for us." « Narrative of Sister Mélanie Desruol [1887 ?].

During her lifetime, Mother Thérèse met a great saint who also encouraged the Sisters to holiness. It was in 1883, when Don Bosco visited the community of Fourvière. He was then travelling in France to raise money for the construction of the church of the Sacred Heart in Rome.

Like any other document evoking Mother Thérèse, the Journal of the house of Lyon-Fourvière was used during the process of beatification. It recounts the event [ill.]: 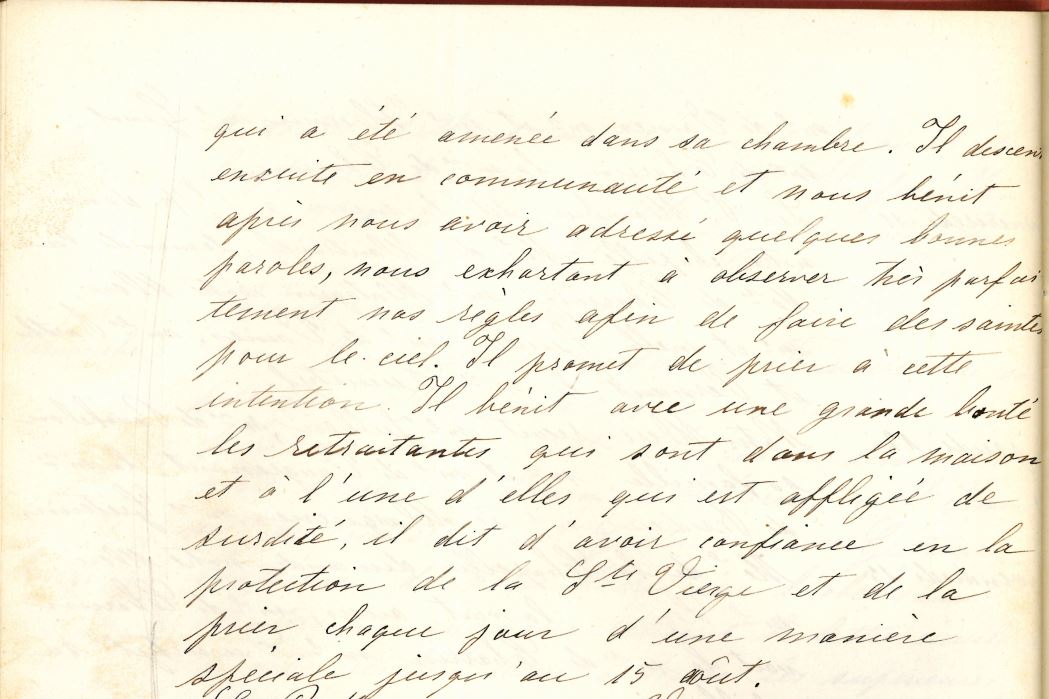 Feast of the Patronage of Saint Joseph. Don Bosco honored our house with his visit. He arrived at 11am. Our Mother, led him first to Mother de Fraix, while the Community was gathering. He gave her a very special blessing, as well as to Mother Thérèse, who was brought to her room. He then went down into the community and blessed us, after having addressed us with some good words, urging us to observe our Rules very perfectly in order to make Saints for Heaven. He promised to pray for this intention. He blessed with great kindness the women who were on retreat in the house, and to one of them who is afflicted with deafness, he said to trust in the protection of the Blessed Virgin and to pray to her every day in a special way until August 15.

The superior of the house, Mother Victorine de Gaudin, added: « Nothing more charming than these two saints mutually recommending their prayers to each other. » (Letter from Mother de Gaudin to Mother Marie Aimée, 16 April 1883)

After this visit, Mother Thérèse told this to Mother Geneviève Faure, who in turn told it to Mother Marie Aimée, Superior General:

Please allow me only to tell you with gracious humility what she told me about the visit of Don Bosco. After describing to me her interview with Mother de Fraix, etc., she added as if by accident: - And he was told that there was still an infirm Sister [note in the text: Mother Thérèse was then very ill for a month] who would be happy to have his blessing, so he came to see me . . . And I was tired after this visit . . . but much more tired than before! I had not asked for my healing, I did not expect it. I have said : My God, give me all the graces that you have linked to the blessing of this holy man. . .Oh! he is indeed a holy man, she repeated with strong conviction.  ” (Letter written from Turin to Mother Marie Aimée Lautier, 8 oct. 1885.) 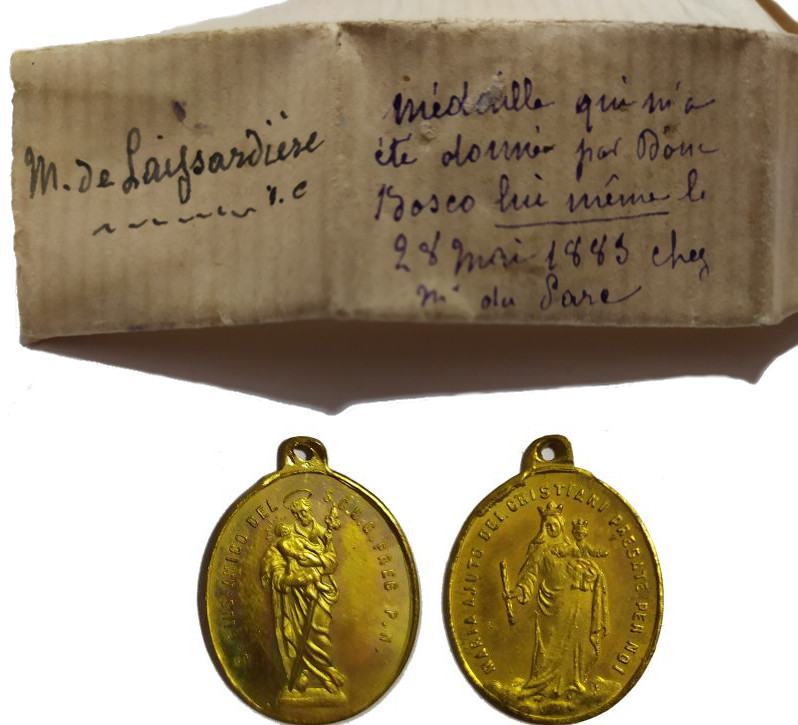 During his tour of France, Don Bosco also went to Dijon on May 28, 1883, where he gave a medal to mother de Laissardière.

In 1886, two Sisters of the community of Turin (house founded in 1881) paid a visit to Don Bosco, who at that time received (guests) only infrequently, "almost unable to move". One of them wrote, "I told him about our last loss. He remembered that our venerable Mother Thérèse had died, and as if he knew of our filial piety for her, he said to me: do you collect documents on her? But it must be done seriously – who knows? ” (Letter from a Mother of the Cenacle of Turin in 1886, arch. gén., 5 D1.)

It was Pope Pius XI, the Pope of the Cenacle, who encouraged the beatification and canonization of Don Bosco. They took place respectively in 1929 and on Easter, April 1, 1934, the closing day of the Holy Year. He had known Don Bosco and had visited his work in Turin-Valdocco as a young priest. He was then professor of theology at the major seminary in Milan and curator of the Ambrosian library in Milan, but also chaplain of our house in Milan. 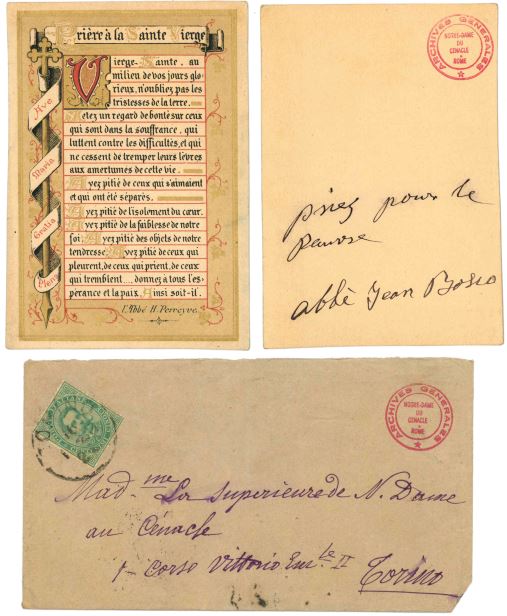 Image of a prayer of Abbé Henri Perreyve (1831-1865) at Notre-Dame de Lourdes on the back of which is written by the hand of the saint « Pray for the poor Abbé Jean Bosco ». It seems to have been given to the Superior of the Cenacle of Turin. Image: lith. , ed. Desgodets and Gerard (Paris), 1880.