02 Canonisation Praying the Name of Jesus with Mother Thérèse

Praying the Name of Jesus with Mother Thérèse

"At the name of Jesus every knee should bow, of those that are in Heaven, on earth, and under the earth. And that every tongue should confess that the Lord Jesus Christ is in the glory of God the Father."  (Opening Introit, Feast of the Holy Name of Jesus (cf. Ph 2:10-11))

At the beginning of January/ a few days after Christmas, the Church celebrates the Most Holy Name of Jesus to celebrate the day when, during the circumcision, the name ‘Jesus’ was given to the newborn child, according to what the angel had announced to Joseph: Joseph: « Your wife Mary […] will give birth to a son and you must name him Jesus (which means “The Lord saves.”) because he is the one who is to save his people from their sins. » (Matthew 1:21).

This month, let us learn at the school of Mother Thérèse to invoke the Name of Jesus: « let us offer God an unending sacrifice of praise, the fruit of the lips of those who acknowledge his name.» (Hebrews 13:15). 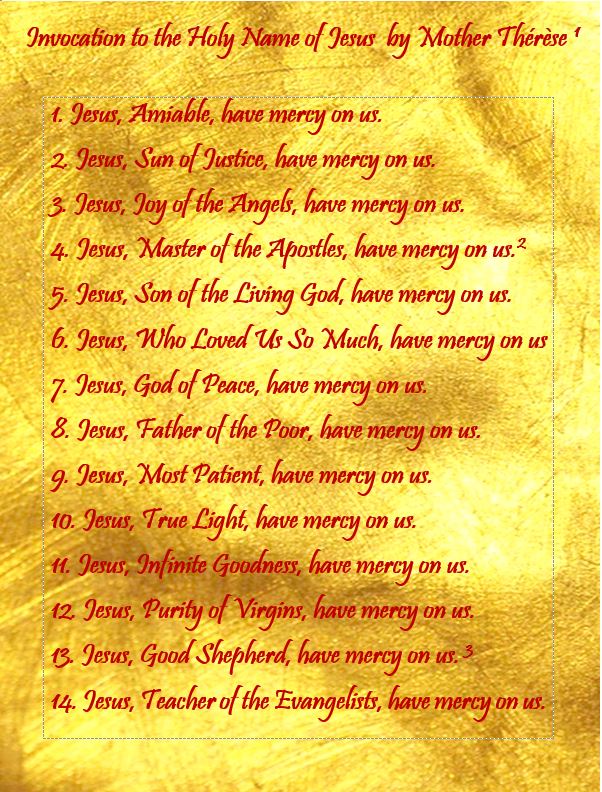 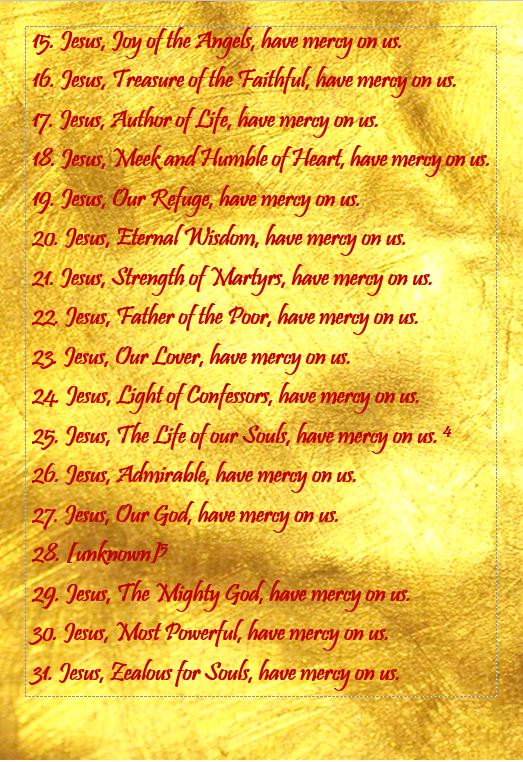 The invocations written on small pieces of paper by Mother Thérèse are from an ancient litany of the Most Holy Name of Jesus, probably composed in the fifteenth century by St Bernardin of Siena and John of Capistrano, propagators of this devotion to the Holy Name. They were approved in 1585 by Sixte V for private use. A revised form of the litanies was approved for public use by Leo XIII in 1866. Pius XI, the Pope of the Cenacle, attached indulgences to it: an indulgence of 7 years and a plenary one on ordinary conditions if so recited every day for a full month (2 January 1933).

From the beginning, the devotion to the Name of Jesus was spread by the Franciscans and then by the Jesuits.

How did Mother Thérèse pray the Name of Jesus?

To discover this, let us read the testimonies of her contemporaries, written at the request of the Superior General and those given orally during the beatification process. Each color corresponds to a testimony.

The presence of God was constant to her; and from this, came the facility of being in conversation with Him, which was so familiar to her, and despite this, she used her ingenuity... during her long [hours] of manual work; thus, to give but one example, she had written the Litanies of the Holy Name of Jesus separately on little pieces of paper and placed them in a bag which hung on the chair she used for her work. From time to time she pulled out one of them, meditating on it at leisure; then she went on to the next one, seeming to draw much fruit from this practice.[1]

After her death, […] We were very moved by the discovery of a little bag made of old indian cloth containing little rolled up pieces of paper indicating their long service. On each one of them written by the hand of our venerated Mother was an invocation from the litanies of the Holy Name of Jesus.

Silently, in the embrasure of a window, the holy Mother used to ply her needle without raising her eyes. From time to time, a sigh, an ejaculatory prayer revealed her union with God. [2]

I noticed her constant prayer. I said to her on a Sunday: But, Mother, you always pray!” I have to work or pray. Today I don’t work, so I have to use my time to pray.” [3]

The manual work, and the most assiduous work, filled all the time she did not give to prayer. She devoted herself to it until she was tired, and she thought she was doing nothing, and considered herself a useless member! [4]

She mended every skirt with great care. She was not disdainful and put all her heart even to mending the rags; seeing her work, it was easy to see that her heart was ‘higher’; she always kept her collected air, her attention to the presence of God. [5] 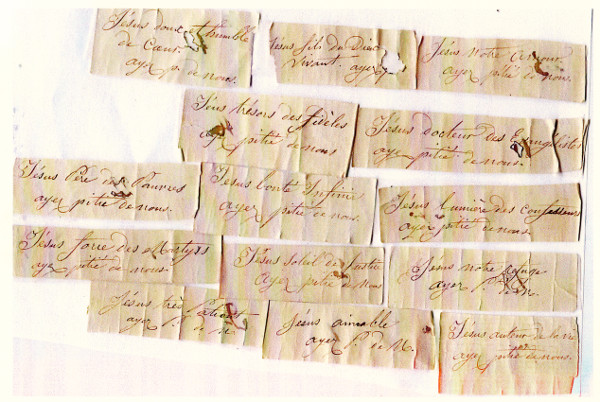 These litanies of the Holy Name of Jesus were said during the common Morning Prayer, until the General Chapter of February 1862 abolished them. 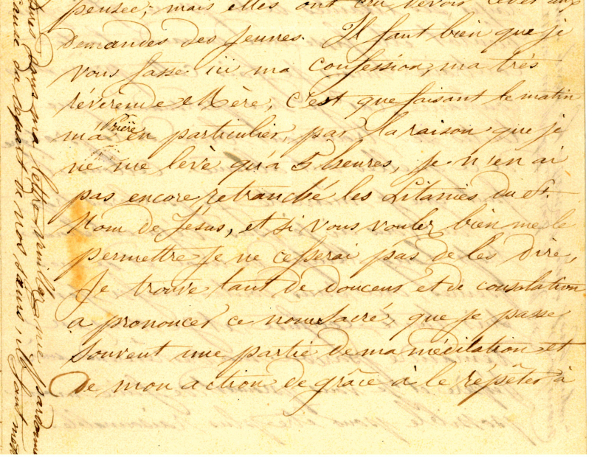 Mother Thérèse then wrote to Mother de Larochenégly, Superior General, in vivid terms, her regret that they had disappeared (letter of 27 May 1862). She continued to pray them in private. “I find so much sweetness and consolation in saying the Holy Name that I often spend part of my meditation and thanksgiving repeating it, meditating on it, tasting it, invoking it, blessing it. Jesus, my life, Jesus, my love, Jesus, my all... In one’s great poverty, one feels such a great hunger for this sovereign good, for this unique good, source of all goods and without which all other goods are but ills, that one feels inclined to call Him with all the strength of one’s soul”.

[1] “Memories of our venerated Mère Thérèse” by Mother Césarine de Ferrari, produced at the canonization process instructed by the Local Ordinary, Lyons (1922).