Marie Desgrands, Ordinary Trial, Lyon (1920): She was detached from everything. When at the end of her life she lost [the use of ] her hearing, she said, "I have always desired not to hear the creatures speak, now I cannot hear from the Creator." Mother Thérèse was sober in everything, ate very little: she cut into tiny pieces the liquorice candies used for cough and in this way the provision of a day lasted a week. Likewise, the small bottle of wine lasted indefinitely. I did not know if Mother Thérèse was doing corporal penances. I only knew from Mother Bertier that she was fasting during Lent, [even] when she was dispensed by age.

Mother Félicie Rostaing, id. : “Every year, at the time of the Passion, she thought of mortifying herself more and did not fail to send the Reverend Mother Superior the list of penances she thought she would do.”

Memories of Mother Cesarine of Ferrari, who lived with Mother Thérèse in 1859-1852 and 1872-1879, produced by Mother Baudot, Ord. Trial, Lyon: “As for her mortification, she was relentless and as the Rule says: constant in all things.”

Mother de Vaines, Ord. Trial of Malines (in Bruxelles): "Concerning the law of fasting, she said to the exempted nuns:" If you are dispensed, obey, but regret it. " Seeing one day an elderly Sister who had almost lapsed into second childhood take a work 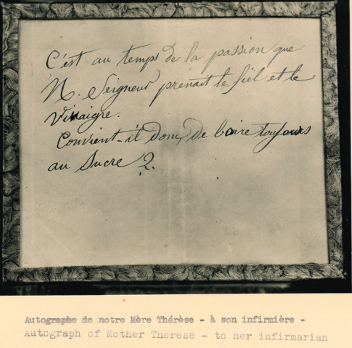 basket, and start to work on a Sunday, the Servant of God was very grieved to see an act taken contrary to the laws of the Church. "

Mother de Vaines, id.: “Her devotion to the Passion reminds me of the following trait I heard told to Mother Anna who was in charge of the stockroom. Mother Thérèse took sweet wine for her snack; we were in Lent. When the time of the Passion came, she wrote to this Sister the following little note: "This is the time when Our Lord was drunk with gall. Should we continue taking sugar? " And the sweet wine was removed. "

Mother de Montgrand, id.: “Later, as Superior in Rome, I saw Mother Thérèse again in Fourvière. She was already secluded in her room. Since I didn't seem to be in the best shape at the moment, she said to me: "You are so thin, so pale; it is not necessary to do too much penance, it is already a great penance to exercise the office of Superior". She added: "Eat, drink, sleep, it is sufficient penance to bear the different temperaments."

Mother de Montgrand, id.: “Temperance: She was very sober for herself: the strict necessities, while being very broad for others. When, at the end of her life, she was given a few exceptions, it cost her a lot. She always replied: "this is not for the poor"."

Mother de Belenet, Ordinary Trial, Lyon: "Sister Clémentine, who died in Montpellier in 1928, while still a novice in Lyon had been a nurse’s aide and was responsible for setting the tray at Mother Thérèses’s for her meals. One day, she forgot to set a glass. Mother Thérèse did not want to point that out. I do not remember whether it was the same evening or only the next day (that is, if she had a meal without a drink or both on that day) when she saw the sister looking for something, she said to her: “You’re looking for the glass, but there’s no glass.” The Sister, regretting her clumsiness, began to apologize, but the good Mother began to calm her, assuring her that it was entirely appropriate, and not to have the slightest regret. However, the novice came to Mother de Gaudin to tell her of her foolishness and all the regret she felt. She comforted her by telling her that Mother Thérèse had been very happy to have the opportunity to offer this little penance to the good God, especially since the conversion of a sinner for whom she had offered this deprivation had just been recommended to her, and grace had been obtained: the sinner was converted.”