Mass of Thanksgiving for the 150th Anniversary
of the text written by St Therese Couderc: Self-Surrender

Therese Couderc was born in Le Mas, Sablières (Ardèche, France) on February 1, 1805, into a farming family.

In 1826 at La Louvesc (France), with Fr. Stephen Terme, she co-founded a religious congregation

dedicated to faith formation through retreats, catechesis and other spiritual ministries –

The Congregation of Our Lady of the Cenacle.

in a spirit of deep faith and humility.

Her spirituality, rooted in a deep mystical experience of the Goodness of God,

is characterized by her self-surrender and a total abandonment to the will of God under the guidance of the Holy Spirit.

The Congregation she founded has spread worldwide. 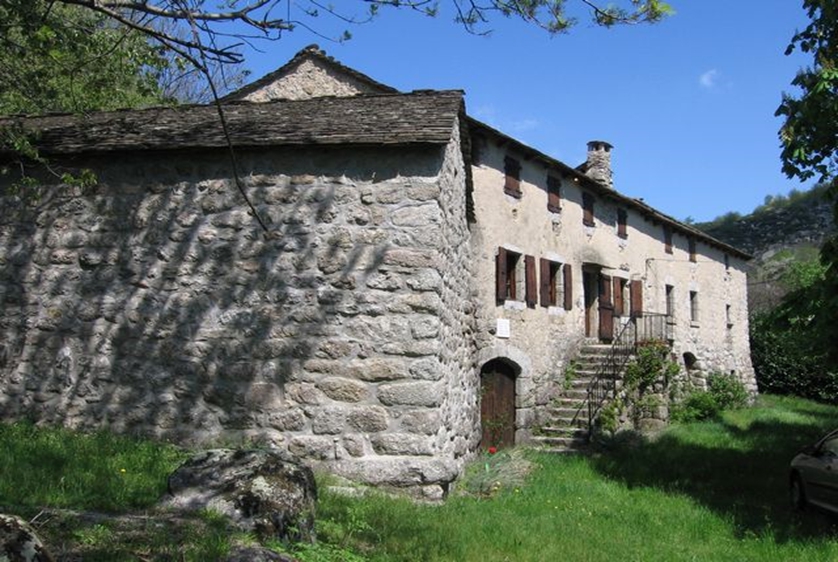 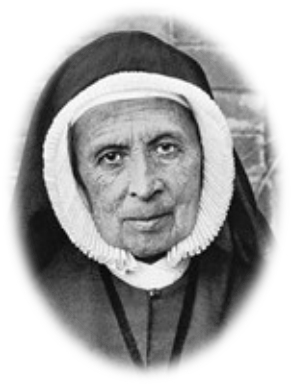 June 26, 1864 St. Thérèse Couderc wrote a text, on the top of which she marked "to keep".  She explains what "Se Livrer" signifies for her.

Over the years, this privileged expression has marked the Congregation of the Cenacle. Not only is it proposed as an ideal for all the Sisters but it is also a treasure for the Church, a taste for all those sensitive to the depth of this word.

Here is the full text of Se Livrer, followed by the Gospel for the celebration of the Feast and the homily given on June 26, 2014, by Father Michael Paul Gallagher, Rector of the Bellarmino Jesuit community and until recently Head of the Fundamental Theology Department at the Gregorian University.

Our Lord has often made me understand how helpful it is for a soul desirous of making progress in the spiritual life to SURRENDER HERSELF - to give herself - unreservedly to the guidance of the Holy Spirit. But this morning it pleased his divine goodness to give me again a very special perception of it. I was preparing to begin my meditation, when I heard the pealing of the church bells calling the faithful to assist at the divine mysteries. At that moment, I desired to unite myself with all the Masses being said, and to that end I directed my intention so that I might participate in them. Thereupon there came to me a general view of the whole Catholic world and of a vast number of altars upon which at one and the same time the adorable Victim was being immolated.

The blood of the Lamb without stain was flowing in abundance over every one of these altars, which seemed to be surrounded by a light cloud of smoke ascending towards heaven. My soul was seized and penetrated with a feeling of love and gratitude on beholding this most abundant satisfaction that Our Lord was offering for us.  But I was also greatly astonished that the whole world was not sanctified by it. I asked how it was when the Sacrifice of the Cross offered only once was sufficient to redeem all souls, that now being renewed so many times, it was not sufficient to sanctify them all.  This is the response I thought I heard: “The sacrifice is without any doubt sufficient of itself, and the blood of Jesus Christ more than sufficient for the sanctification of a million worlds, but souls fail to correspond; they are not generous enough.” Now the great means of entering into the path of perfection and holiness is toSURRENDER ONESELF to our good God.

To SURRENDER ONESELF finally, is to die to everything and to self, to be no longer concerned with self except to keep it always turned towards God. 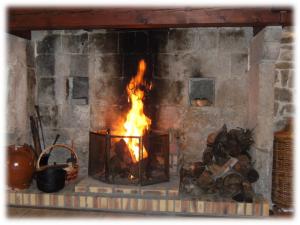 But perhaps you will think this is very difficult to do. Do not let yourself be deceived; there is nothing so easy to do, nothing so sweet to put into practice. The whole thing consists in making just once a generous act, saying with all the sincerity of your soul: “My God, I wish to be entirely thine; deign to accept my offering” - And all is said. From then on, take care to keep yourself in this disposition of soul, and not to shrink from any of the little sacrifices which can help you advance in virtue.  Remember that you have SURRENDERED YOURSELF.

I pray our Lord to give an understanding of this word to all souls desirous of pleasing him and to inspire them to such an easy way of sanctification. Oh! If people could just understand ahead of time the sweetness and peace which are savored when nothing is held back from the good God! How he communicates himself to the soul that seeks him sincerely and has known how to SURRENDER HERSELF!  Let them experience it and they will see that here is found the true happiness they are seeking in vain elsewhere.

TheSELF-SURRENDERED soul has found heaven on earth since she enjoys that sweet peace which is part of the happiness of the elect. 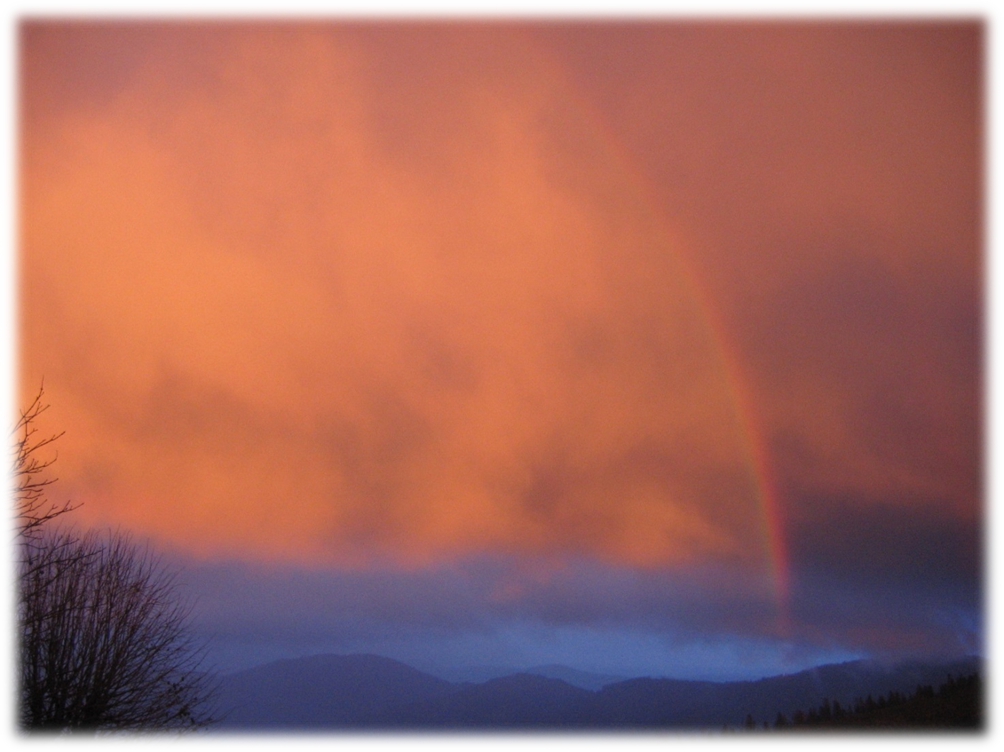 Jesus said to his disciples:
“Truly, truly, I say to you,
unless a grain of wheat falls
into the earth and dies,
it remains just a grain of wheat;
but if it dies, it bears much fruit.
Whoever loves his life loses it,
and whoever hates his life

in this world
will keep it for eternal life.
Whoever  serves me must follow me,
and where I am,
there also will my servant be.
The Father will honor whoever serves me.” 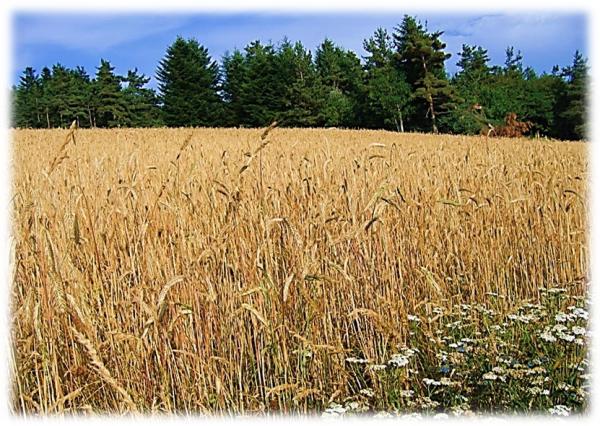 In the homily of Fr. Michael Paul Gallagher, we see the links between the passage from the Gospel of John, the Eucharist and St. Thérèse Couderc’s  understanding of Se Livrer.

Today, on this special occasion, one hundred and fifty years after the composition of the text of St. Thérèse Couderc, there is a beautiful convergence between this precious text and the biblical readings of this liturgy.  I would like to invite you to savour the richness of a small word that we heard in the Gospel, and also in the acclamation before the Gospel, the word in Italian isrimanere, (in English remain), in Greek menein.  This word, so ordinary, takes on a mystical and poetic resonance in the Gospel of John.  Just as in the first encounter between Jesus and his disciples when they ask him, “Where do you stay?" (often translated as “Where do you live?”),  it is said that they saw where he remained, and they remained with him throughout the day.  Later on in the same Gospel, we frequently find menein:  those who remain in me and I in him/her, bear fruit.  Briefly, Menein summarizes everything in a relationship of mutual belonging; this relationship is so central in the text of Se Livrer, as we shall see.  “To surrender oneself is to die to everything and to self, to be no longer concerned with self but to keep it continually turned towards God.”

But before we ponder the parallels of these texts, we notice the use of menein in the Gospel of this Mass.  It seems that this is the only, let us say, negative use in whole of John’s Gospel.  If the seed does not die, it does not embrace the adventure of Se Livrer; it remains alone.  This sad loneliness is the opposite to God's hope for all of us, a form of closure of the heart, an autonomy without love, a loneliness that resists the journey of “losing oneself” (Jn 12:25) which Saint Thérèse describes as strangely easy and sweet, easy because it is a discovery of unimaginable intimate belonging.

At the centre of this grace which we remember today, it is not a negative loss, but a joyful loss, a loss that is in fact a discovery.  It is not abandonment to an empty space; instead it is the immense relief of being in perpetual intimacy.  It is not my choice, but my trust in God's promise of being able to catch a glimpse of His Glory here below.

St. Thérèse refers to the Mass.  In fact at the centre of our Eucharist, we find the moment of Se Livrer.  The gesture of Jesus at the Last Supper is his Se Livrer before the events of the following day. The words at the end of the Consecration invite us to “Do this in memory of me.”  What is this "this"?  His Se Livrer.   Not simply the ritual gesture, but the interior gesture of Jesus, a deep and personal gesture of offering to the Father for us.

The grace of 150 years ago today, as St. Thérèse tells us, was not a new understanding.  The originality was in the intensity of her perception, a light that she attributes to the Holy Spirit in her.  All of us know, at least in a general way or theoretically, that our freedom calls us, paradoxically, to abandon ourselves completely to God.  We are called today to participate a little in the grace of Saint Thérèse, to move from a notional knowledge (as Newman would say) at least towards a "real" knowledge that enlightens and transforms the heart.  Whoever loves his/her life loses it. Perhaps the Saints, as Thérèse, are different from us in their courage to embrace this light in a permanent and totally transformative manner.  But we also, in a less permanent, less courageous way, are invited to taste and sentir the gift of surrendering oneself to the embrace of God.  In the Saints we see what we dare not yet be, and what gives (all of us) the strength to be faithful to our journey of trust and freedom.

Some Photos from the Celebration: 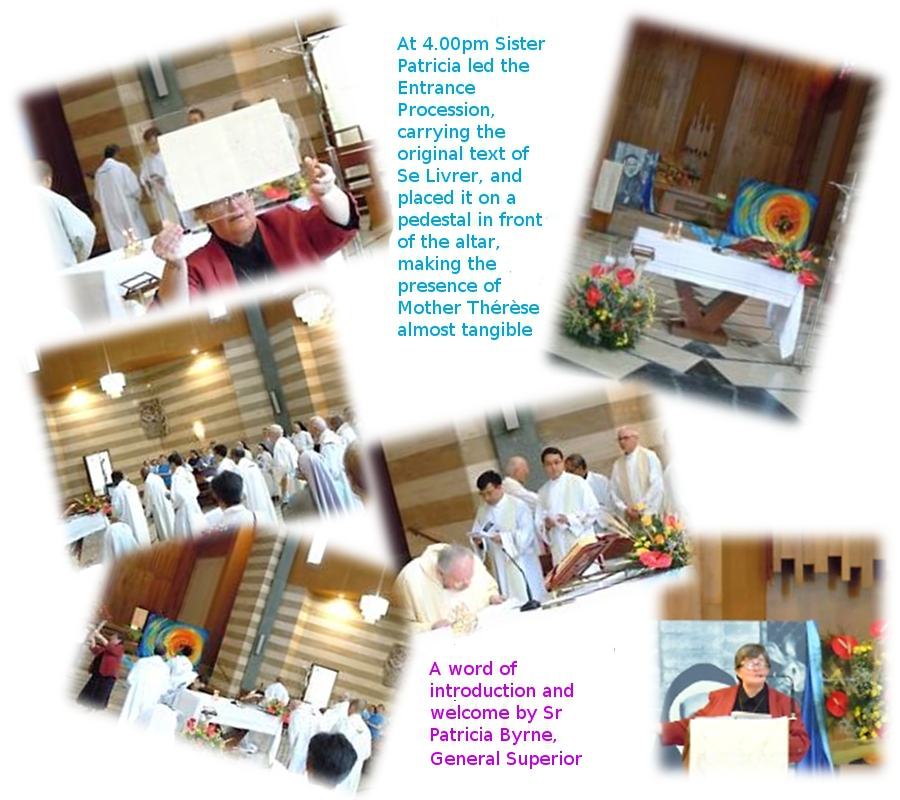 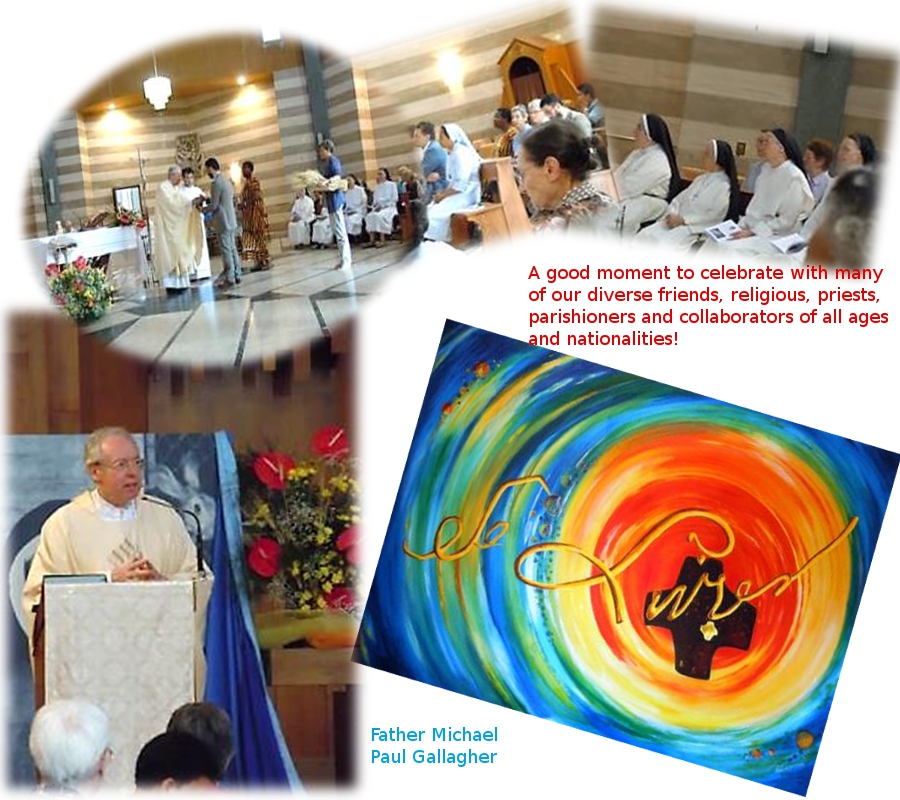