In this section will be presented each month, the different stages which led to the canonization of Saint Thérèse Couderc, May 10, 1970

January: The beginnings of the Cause / February: The diocesan process /March: Beatification

April: The apostolic process / May: Canonization

January: The beginnings of the Cause 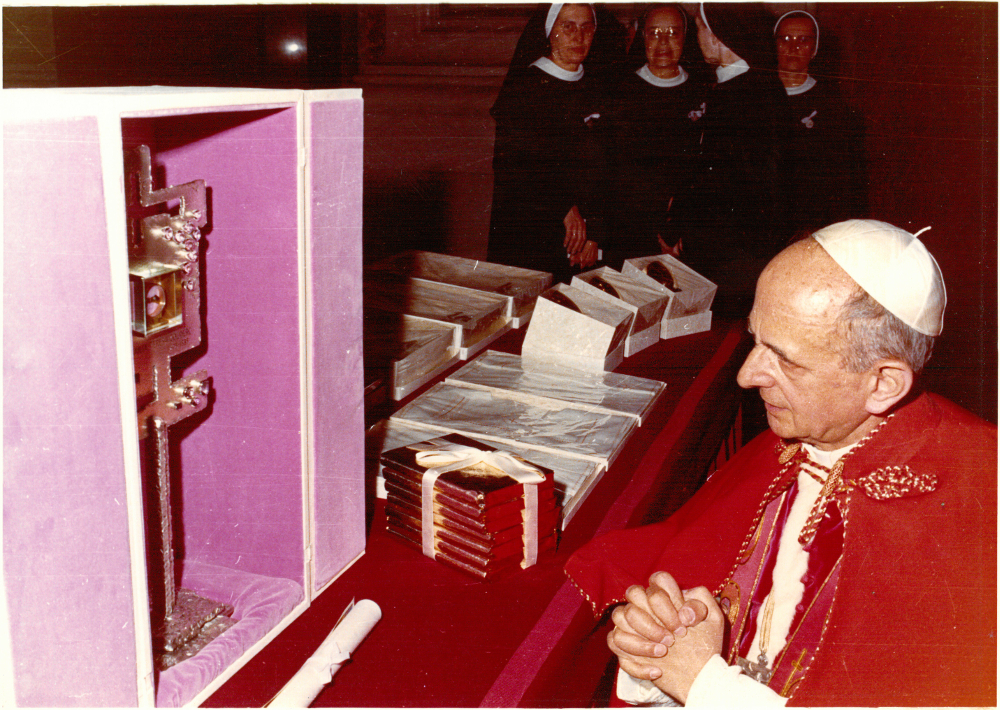 The recognition by the Church of the virtues of Mother Theresa culminating in her canonization is a long process which, from her death in 1885 to her inscription as a saint in 1970, had many stages. In this month of January, let's see what preceded the introduction of her Cause for beatification and canonization. If the idea of introducing the Cause of Mother Thérèse, at the same time as the Cause of Father Terme was quickly advanced, the realization would take a little time.

Recognition of the holiness of Mother Thérèse from her death

After an agony of almost two months, our Mother Thérèse died in the odor of holiness. The General Secretary  immediately sent a letter to the Congregation to announce this death.  (Look at the original in French) Several sisters of the Cenacle and priests testified that they had received a grace for the time and day of her passage to heaven. Immediately after her death, souvenirs (relics) were requested and sent to the houses and to the Jesuit Fathers. Veneration began.

La Louvesc's Superior wrote to Mother Chartier: “truly I did not do what one usually does, beside that coffin. This is a real fact, and we all did the same. We wanted to pray for the departed one, but in spite of ourselves we prayed to her.  Our retreatants experienced the same thing. One of them said to me: really one did not know what to do beside that Mother, one wished to pray for her but instead one prayed to her for oneself.”

At the funeral, the Father who was the parish priest in La Louvesc exclaims: "May that coffin re-open amid the thrills of holiness in the splendor and triumph of miracles."

In Lyon, Mother Thérèse’s bedroom was left as it was on the day of her death. The Sisters had merely added her portrait and a cupboard with glass doors, which contained her clothing and the objects that she used. Each Sister came to pray there.

Mother Thérèse acts from Heaven for the Congregation

The months that followed saw the crowning of Mother Thérèse’s work through the recognition of distinctive features of the Congregation. These graces were attributed by contemporaries to the intercession of Mother Thérèse:

January 1886: Bishop Guibert expressed his satisfaction at seeing the congregation grow and called it to be at the feet of the basilica under construction in Montmartre

January 10, 1886: approval of the Blessed Virgin Mary of the Cenacle

June 6, 1886: first celebration of the Feast of Our Lady of the Cenacle

January 29, 1886: approval of the liturgy of the Congregation

July 23, 1886: final approval of the Constitutions

During the year following the death of Mother Thérèse, the General Superior regulated, by means of various letters to the Congregation, how to bear witness to the memory of her Foundress.

On December 8, 1885, she wrote: “The suffrages requested for her blessed soul do not satisfy our ﬁlial piety, so we invite the local superiors to have them continued in a large measure for her, for our deceased sisters and for all the souls in purgatory. So that, if it pleases the Divine Majesty, those holy souls whom our venerated Mother helped during her life with such charity, may be delivered or greatly solaced by our prayers and our daily works. Moreover, we desire that the three Gloria Patri which follow the Angelus be offered for the special intention of obtaining from the Divine Goodness that the Cause for beatiﬁcation of our ﬁrst Mother and for Father Terme may be introduced without delay.”  (Look at the original in French) She also asked to begin the collection of testimonies about Mother Thérèse and to do what is necessary to obtain the indulgencies attached to her prayer to the Holy Trinity. (translation of the beginning of the letter)

On August 25, 1886, the General Secretary communicated an Ordinance from the General Superior establishing a novena to obtain the glorification of the Founders: "Henceforth in all our Houses each year on September 26th, Holy Mass and general Communion will be offered for Mother Therese, and on December 12th for Father Terme. Our Sisters will recommend to our venerated Founders the preservation of our Society and its happy growth to the greater glory of God and of Our Lady. For the same intentions each one will offer daily her Communion and the Stations of the Cross during the novena that precedes these two anniversaries. All our religious will add to these practices any that their piety inspires and which are approved by holy obedience."

First steps to introduce the Causes of the founders

Mother Marie Aimée, General Superior, spared no effort to introduce the cause of beatification and canonization of the founders.

At the General Chapter on August 1887, Monsignor Raffaele Virili, specialist in the matter, was appointed General Postulator of these Causes. Already, on March 15, 1887, a note sent to the Congregation asked that the memories of the founders be noted. (Look at the original in French). To develop and affirm the devotion to Mother Thérèse, more than two thousand relics were distributed just for the year 1887.

The energy displayed by Mother Marie Aimée was particularly rewarded in 1890. During her trip to Le Plagnal and Sablières, the respective hometowns of the founders, she was touched by the devotion of the population for them. Pope Leo XIII, during an audience requested also for more information on the life of the founders. The same Pope attached a 200-day indulgence to the revised prayer of Mother Thérèse, “Power of the Father” (March 15, 1890). ) Archbishop Angeli, private chaplain of the Holy Father and chaplain of our house in Rome, promised to do everything in his power. The R.P. Viérin SJ, designated vice-postulator, suggested to gather all the necessary elements. Gradually we were closer to the time for compulsory formalities which would open the diocesan trial for Mother Thérèse. 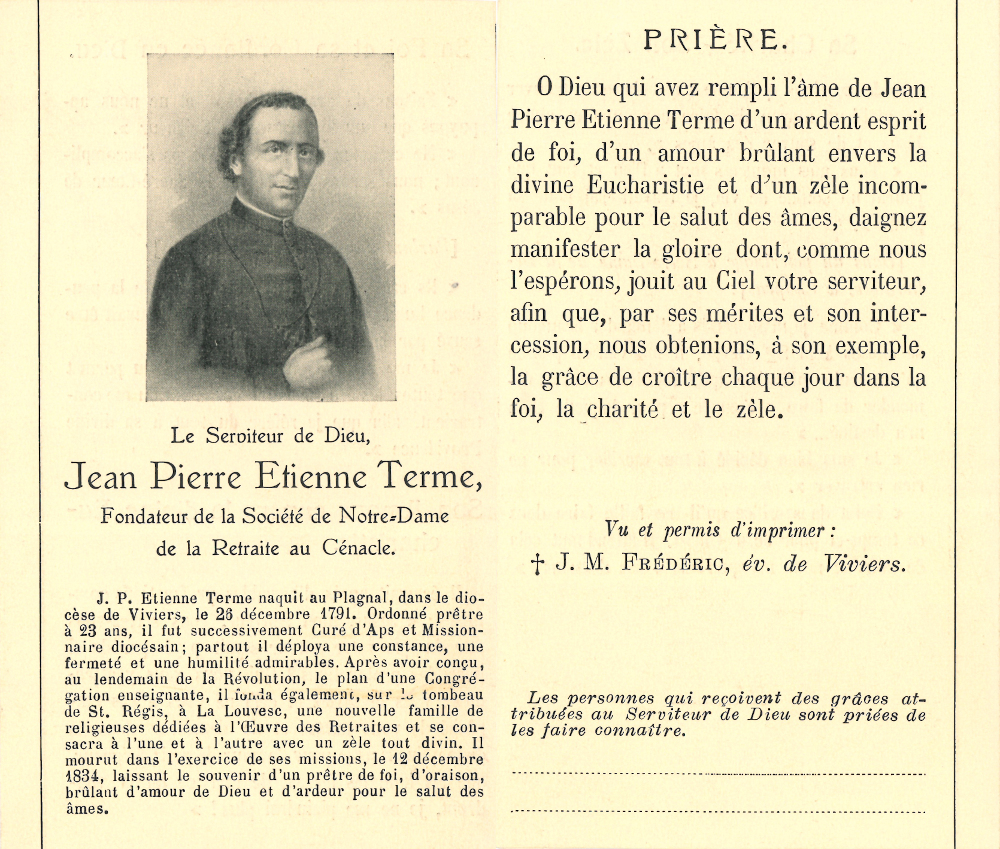 The Difficulties in the Cause of Father Terme

At the same time, the vice-postulator of Father Terme’s Cause got impatient and we thought about the advisability of continuing. The difficulties were twofold. First, even if the reputation for holiness was established, the trial was unlikely to succeed because it was no longer possible to collect testimonies in a canonical form. And then the diocese already had experience in the Cause of Marie Rivier, founder of the Sisters of the Presentation of Mary, which lasted long and was costly.

Getting to Know Mother Thérèse

Book of R.P. Longhaye containing the portrait by J. Aubert 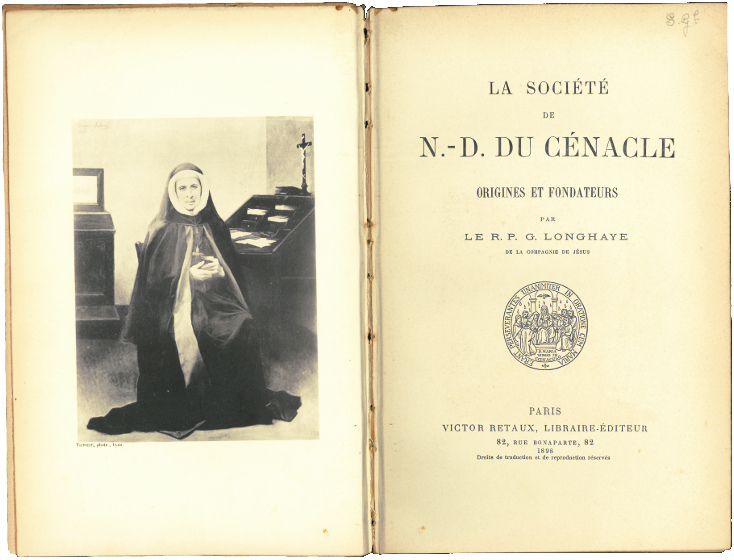 To make known the figure of Mother Thérèse, we want to rely on a biography which presented her as well as Father Terme and the Congregation. The search for the author was long, but finally the archbishop and the Congregation agreed on the person of RP Georges Longhaye SJ (1839-1920), author of dramatic religious works, who worked from 1895 to 1897 from the documents made available to him, while taking into account also the remarks made to him. The book “The Society of Our Lady of the Cénacle: Origins and Founders”, was printed in 1898. But an obstacle had not been foreseen: the book could not be sold in bookshops. Cardinal Richard, Archbishop of Paris, supported it in the context of the political events in France. They were in the midst of an anti-clerical climate; laws have been passed against religious congregations (ban on teaching, dissolution of the Society of Jesus, obligation for congregations to ask for authorization, expulsions, etc.). It was not the time to shed light on religious institutes. The book was, however, widely distributed among the clergy who were friends of the Congregation.

At the same time, a painter who was used to working for religious congregations, Joseph Aubert, was asked to paint the portrait of the founder, a work he completed in 1892.  Mr. Aubert was so happy with his work that he wanted to exhibit the portrait of Mother Thérèse at the Universal Exhibition in Brussels in 1897 because it was his best portrait.

Despite the desire to move forward, at the start of this century of uncertainly over the future of the religious congregations in France, the Cause of Mother Thérèse was not evolving quickly. Once again, Mother Aimée asked for the prayers of the Congregation so that the introduction of the cause of Mother Thérèse would be successful. At the urgent request of the postulator, she also asked that the collection of testimonies be done (letter to the Superiors of May 26, 1901). Indeed, there was an urgent need to do so before all the eyewitnesses died.

In the General Chapters, the subject was also brought up. In 1902, the words of the postulator, Bishop Virili were mentioned. For him, even if the heroic character of Mother Thérèse’s virtues seemed obvious, the Cause would be difficult because there were too few people outside the Congregation who could testify. The Congregation should, therefore, put forward this work and try to develop devotion to Mother Thérèse. He already summed up his thought in 1900: “one of the great ways to have your Foundress canonized is to prove her sanctity by the sanctity of your Institute and by its works. There will be fewer deeds and less exterior life in this Cause than in most of the others; few or no works apparent. It is her daughters who are charged to do this part and the works which she was not called to accomplish. The prosperity and the expansion of the Institute and of each of your houses are a proof of the holiness of the Foundress.” (summarized by R.M. de Foras, Superior in Rome, in a letter to Mother Marie Aimée).

In the Chapter of 1907, the “unanimous vow [to introduce] the Cause of beatification of our holy foundress was affirmed again; however, we are still at a time of prayer. We must faithfully use this all-powerful means, spread their portraits, their relics and not neglect anything for the recognition of the graces obtained through their intercession.”

The 25th anniversary of the death of our founder would, in a way, give the Congregation the opportunity to put the advice of the postulator into practice. As the Dispersion did not allow for the public celebration, Mother Marie Aimée fixed the manner of commemorating the event in another way: “ filial piety can and should increase our zeal to hasten the glorification of one whose humility in this life was so precious to the Lord […] The best way of honoring the saints is to imitate their virtues. Our lives will be a paean of praise in honor of our venerable Mother if we are faithful to our holy promises and guard with loving vigilance the vows which bind us to the Infinite Goodness, “if we constantly strive to avoid the omission of any point of perfection to which by God’s grace we can attain in the prefect observance of all Constitutions, and in the use of all the means of spiritual advancement afforded by the Institute” (letter to the Congregation of September 15, 1910).