02 canonisation Stage of the Cause (February 2020)

Cause for the Beatification of Mother Thérèse: Opening of the Diocesan Trial

Last month, we saw how, in the years following Mother Thérèse's death, the Congregation wished to make her known and start a process of beatification and canonization. This month, let us discover how this trial opened. But before that, let us see how the events of the early 20th century had an impact on the Cause.

Transfer of the Body of Mother Thérèse during the Dispersion

At the very beginning of the century, laws against religious congregations prohibited them from existing and confiscated their homes in France. To continue religious life without hiding, the Sisters were exiled outside France. This is called The Dispersion. Others remained in France and continued the apostolate in civilian habit. When possible, the houses were entrusted or purchased by friends of the Cenacle. 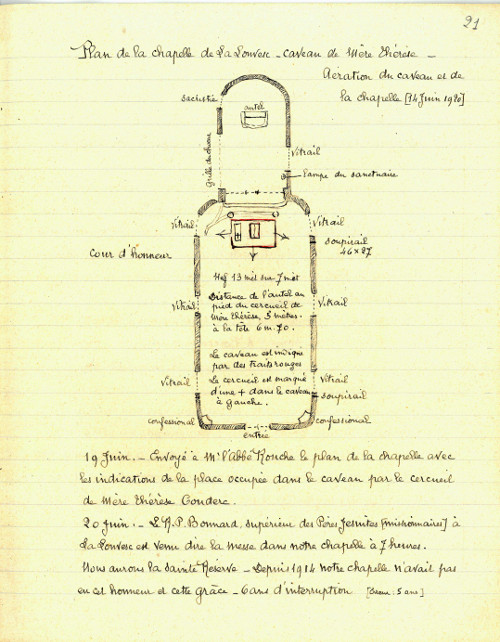 This was the case of La Louvesc, where the Doctor Eugène Vincent (1843-1926) installed a health center. He loved Mother Thérèse and her congregation very much. He wholeheartedly wished to do something for them. In agreement with Mother Marie Aimée, Superior General, and with the complicity of the religious and civil authorities, he organized in 1909 the transfer of her body from the cemetery of La Louvesc, where she rested in the vault of our Congregation, to the chapel of our house. He had a vault installed under the chapel floor to place the coffin there. In order not to arouse suspicion, he told the workers that he was digging a cave to install a heating system. The body of Mother Thérèse would remain there until 1951. Before this date, it would only be released for the first examination of the remains of Mother Thérèse in 1929.

(Cf. Plan of the chapel of the house of Lalouvesc indicating the location of the vault for the coffin of Mother Thérèse. Notebook of Dr. Vincent.)

Mother Thérèse at the Frontline during the First World War

The Dispersion had the consequence of increasing the number of Sisters in the houses of countries close to France: in Belgium and Italy, but also in England. The high concentration of Sisters in the houses made new foundations necessary. One of them was in 1913 in Grayshott, 70 kms from London. The work of the house was barely completed before the First World War broke out. England entered the conflict. Military hospitals were needed in the country to treat wounded soldiers returning from the front. As the military command sought to open one at Grayshott, our Sisters proposed a part of the house. 25 beds were installed and 3 professional nurses worked there with the help of some Sisters. A short distance from the house, there was also a military camp. In 1916, a military chaplain asked that soldiers come to pray in the chapel of the house during their day of rest. Those who came first were delighted with the welcome given to them by the Sisters. Their numbers were growing rapidly. Several hundred soldiers would come to spend their Sunday afternoons in the Cenacle. Sunday afternoons were an occasion for a fruitful apostolate with soldiers, often far from religious or Protestant practice.

Why talk about this apostolate at Grayshott? It was not uncommon for soldiers to leave the house with rosary, crucifix or pious image. In their discussions with them, the Sisters inevitably evoked the devotions that are most dear to them. One of them seems to have developed this among the English soldiers, as the annual report of Grayshott's house for the year 1917 tells us: 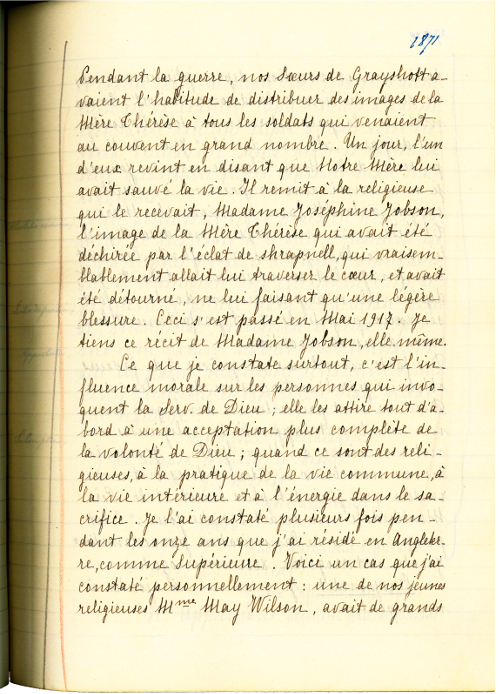 “We must mention here a miraculous protection of our venerable Mother Thérèse towards one of our soldiers who, like many who attended the Cenacle, carried with him one of her images. Being at the front, a bullet hit him in the region of the heart, tore up a prayer book and picture but stopped there, while according to the ordinary course of things it should have penetrated further and caused an instant death. Full of gratitude to our venerable Mother Thérèse, he brought us back as a relic the prayer book and the mutilated image, asking us to replace it." [This story is told at the canonical trial by Mother Vuillaume. ].

[photo : Extract from the deposition of Mother Dorothée (known as Dolly) Vuillaume at the trial on 22 December 1920 in Brussels. She was then Assistant General and Vicar Provincial in England (1919-1928).[1]]

"A military chaplain wrote from the front to the Superior of one of our houses in France to ask her for details about the life of this Mother Thérèse who seemed to be known among the soldiers and whose image circulated in the trenches. These images were distributed by our dear Reverend Mother to all the soldiers who came here on Sunday, and by receiving them they expressed their confidence to be protected by them from all dangers. The Cenacle of Grayshott may have contributed its part to the glorification of our venerable Mother Thérèse."

Another Sister who was at Grayshott at the time testified at the canonical trial about the spread of devotion to Mother Thérèse among the soldiers: "I could see for myself that she was honored by the French Canadian soldiers; in the trenches, she was invoked, she was trusted, the soldiers carried on them the image of the Servant of God. [2] ". 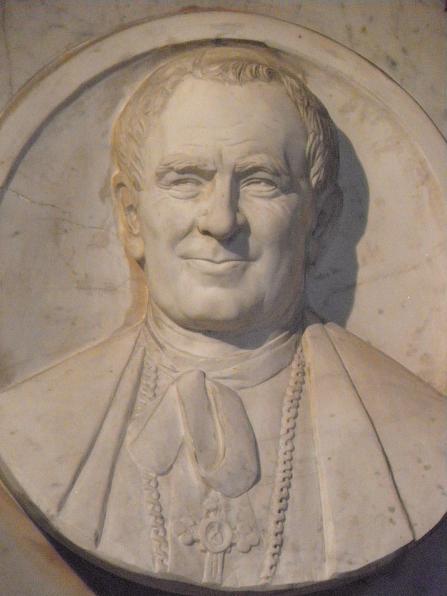 With the outbreak of war, the steps to advance the cause of Mother Thérèse's beatification were put aside. During this time, the Code of Canon Law was promulgated (1917). It gathered for the first time all the laws, decrees and rules of the Church. It stated that the causes of beatification "are reserved for the sole judgment of the Holy See". They are the responsibility of the Sacred Congregation of Rites. However, the preliminary canonical trial (informative trial on the renown of holiness, virtues and miracles of the Servant of God) is diocesan. It is up to the Ordinary of the place (bishop) where the person died, to organize it. Mother Thérèse died in Lyon. Cardinal Joseph Maurin, Archbishop of Lyon and Primate of the Gaules, appointed Stéphane Vindry, Apostolic Protonotary, Dean of the Primatial Chapter and his Episcopal Vicar, to represent him as President of the Tribunal composed of priests of the diocese

Photos : Cardinal Maurin’s funeral stele in the chapel of the archbishops of the Primate Saint-Jean of Lyon 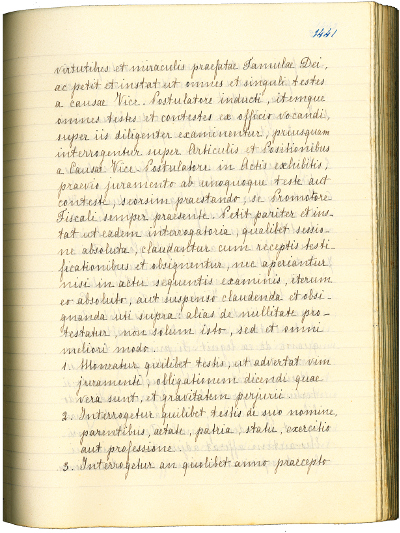 The vice postulator’s wax stamps with his signature, his stamp. 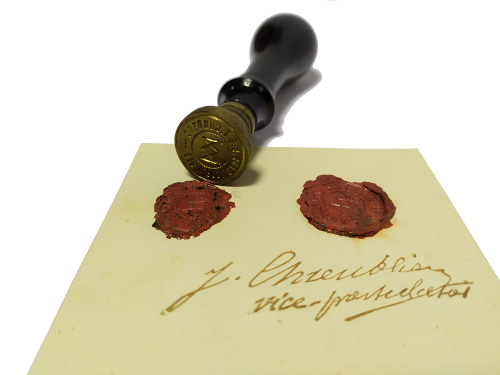 First questions of the interrogations of the informative canonical trial for the Cause of Beatification of Mother Thérèse transcribed in the proceedings. The Congregation retains only a "Public Copy" of the transcript of the canonical trial since the original is kept by the Holy See. The transcript of the canonical trial was written in Latin to be  understood by all members of the Sacred Congregation of Rites charged with instructing the Cause. Only responses of the witnesses and quotations from them were in the original language.

We remember that the Postulator General of the Cause, who was to reside in Rome, had already been appointed in 1887. He was Msgr. Raffaele Virili, who meanwhile had received the title of archbishop. To represent the Cause at the diocesan trial, he appointed Chanoine Jean Choublier (honorary Chanoine of the primatial) Vice-Postulator. The first session of the Tribunal took place in March 1920. After studying the articles of Mother Thérèse's life, the judges began to question the witnesses. In Lyon, 28 witnesses testified: Sisters, members of Mother Thérèse's family, Jesuit priests, Sisters of Saint-Régis, etc. but also Sisters who only submit copies of documents (newspapers of the houses where Mother Thérèse lived, annals, notes, memories, etc.). The diocesan trial in Lyon lasted until March 1922. 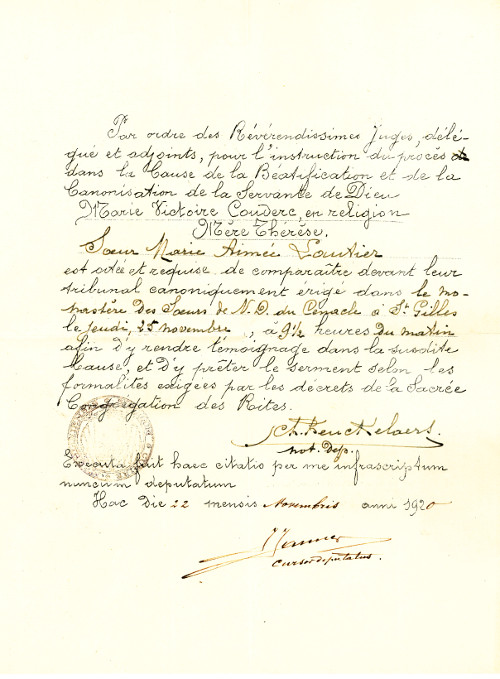 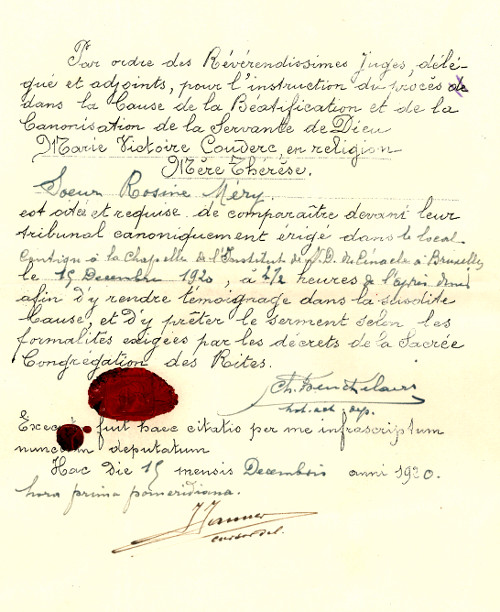 Convocations before the Tribunal of the Cause in Brussels of Mother Maire Aimée (Nov 22 1922) and of Sr. Rosine Méry (Dec 15 1922). (Pay attention, there is mistake in the year!)

The Code of Canon Law provides that there can be several informative inquiries if the witnesses belong to different dioceses. Because of the Dispersion, the General Government of the Congregation transferred from Paris to Brussels. Even if, since the end of the conflict, the Sisters have begun to relocate to France, the General Government remained in Brussels because our Superior General Mother Marie Aimée was too old to move. Born in 1835, she was 83 at the end of the war. It was in our house in Brussels that she died in 1926, at the age of almost 91 years. It was also in this house where she would present the canonical trial for the beatification of our Mother Thérèse.

The canonical trial of the diocese of Malines began in November 1922. The judges interviewed 25 witnesses, including our Mother Marie Aimée, as well as Mother Louise Baudot, Secretary General, and Mother Irene Maranzana, archivist, who filed the documents. In the diocese of Viviers, 11 witnesses appeared in 1921. 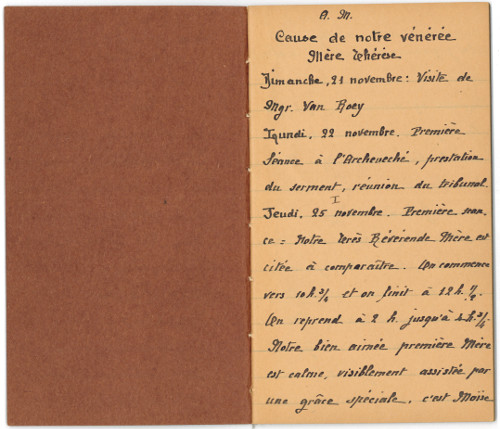 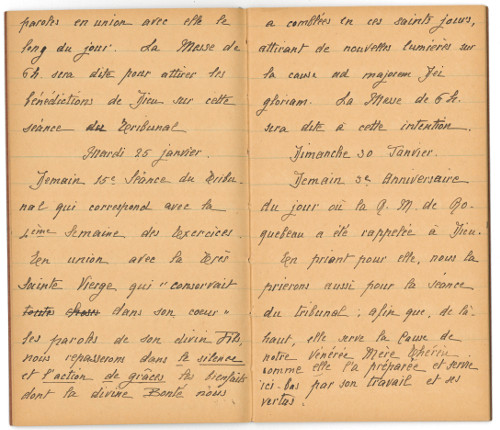 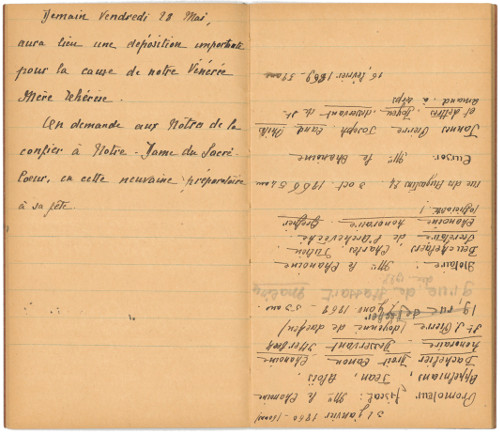 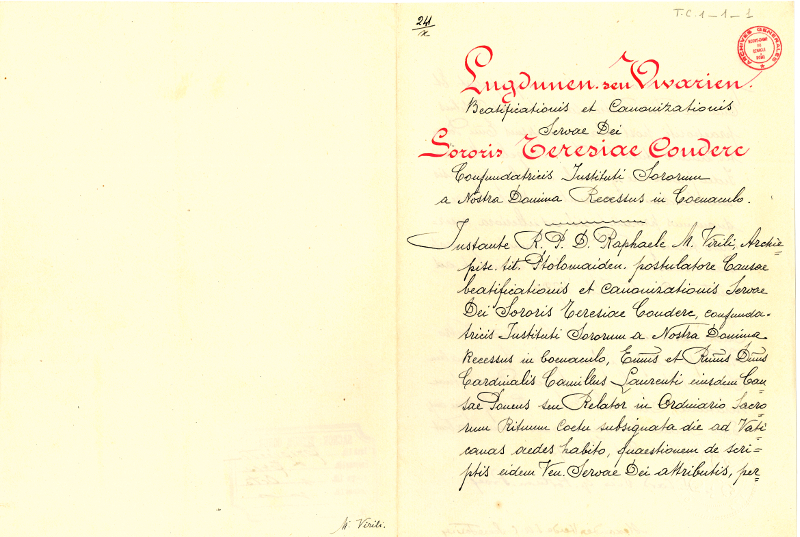 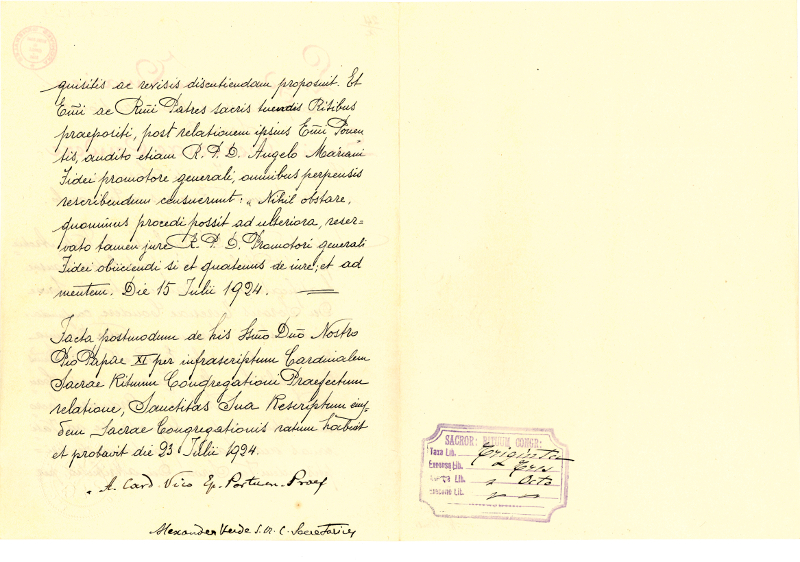 Decree printed by the S. Congregation of the Rites on July 15, 1924 allowing the Cause to continue after the revision of the writings of "the Servant of God, Sister Thérèse Couderc, co-founder of the Institute of the Sisters of Our Lady of Retreat in the Cenacle ".

The results of all these investigations were sent to Rome to be recopied. Mother Thérèse's writings were read by theologians who found nothing contrary to faith and morality. The cardinals of the Congregation of Rites then approved this revision (1924). Then a Positio super introductione Causae was prepared (1927). It gathered in a bound volume an Informatio on the life of the Servant of God and her virtues, a Summary of the informative canonical trials, the observations and difficulties of the Promoter of the Faith (devil's advocate charged with arguing against the candidate's beatification), the answers that were brought to it by the Postulator, as well as the postulatory letters: from 1920 to 1926, 389 cardinals, Bishops, princes, superiors of orders and religious institutes have written to ask for the opening of the canonical trial for the beatification of Mother Thérèse. On July 13, 1927, the SC of Rites signed a Decree for the introduction of the Cause.

[1]  “During the war, our sisters from Grayshott used to distribute images of Mother Thérèse to all the soldiers who came to the convent in large numbers. One day, one of them came back saying that Our Mother had saved his life. He gave to the sister who received him, Madame Joséphine Jobson, the image of Mother Thérèse, which had been torn apart by a piece of Shrapnel, and which presumably passed through his heart and had been diverted, causing him only a slight injury. This happened in May 1917. I have this story from Madame Jobson herself.”

[3] The outbreak of the First World War had brought an end to persecution of religious congregations to allow the "sacred union" of forces. 9,323 male religious return from exile to be mobilized in the army. From 1914 to 1918, 1,237 of them were injured and 1,571 died in the fighting (figures from the Association of Religious Veterans, DRAC). This has allowed mentalities to change. The congregations then gradually returned to settle in France. This is the case with the Cenacle.